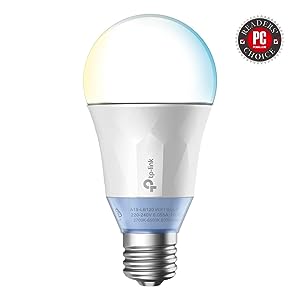 Control your lighting from anywhere with the LB120. The smart bulb installs as easily as a standard light bulb and connects to your home Wi-Fi in no time through the free Kasa app. Kasa lets you manage your lights with your smartphone or tablet, including adjusting brightness, setting schedules...

★☆☆☆☆ After using it for 10minths now the Bulb stopped working and when I initiated the warranty call they accepted to send the device to them and late they replied saying it is burnt and also they returned same old bulb back to me.The purpose of the Bulb is to keep it powered on for 24/7 for all 365 days a year to monitor and schedule the bulb.Because of poor product quality this Bulb didn’t last more than 10months. And warranty is not covered for such things. I don’t understand the logic of having one year warranty for this product.And I purchased this bulb thinking it will last for years. Beware of spending huge on this worthless product. I learnt it hard way.

★★★★☆ LB100 is a smart bulb that I've been using for 3-4 days and I'm really happy with the way it integrates into my living room. The LB100 has the new E27 fitting that screws into bulb holders. Pairing the bulb was fairly easy and initial setup requires the Kasa app available on iOS and Android. You need to create a TP-Link Kasa Account and this will be used to connect the Lb100 to Google Assistant and Amazon Alexa later on!The bulb is fairly bright. It can be dimmed to a variety of brightness levels and the brightness update is reflected in real time as we slide our fingers on the app! I tested the bulb on both Google Assistant and Amazon Alexa and it works really well. Works better with Alexa at the moment I dare say as Google Home hasn't been released officially for Indian Regions. If you want to see this demo, please have a look at my Echo Dot video. I'll also be making a setup video which I'll upload here.Pros : -1) Easy pairing and setup using the Kasa App2) Responsive Kasa App that can set TIMERS, Schedules, PRESET Modes.3) Real Time Dimming and Brightness Variation4) Works Flawlessly With Amazon Alexa!5) Works with Google Assistant.6) Works even when away from home.7) Power consumption also seen from the app.Cons : -1) Expensive bulb2) Not super bright3) Doesn't support multiple colours despite being so expensive.It's a good bulb for getting starting with home automation but it's expensive and doesn't feature colour changing and it's fairly disappointing.

★★★★★ Writing this review here because I guess I needed reviews when I was looking at it.I got this purchase as the starting block of creating a smart home with my new Echo Dot.The first and most important part of this review is that it works wonderfully with the Echo devices.There's no hub or any such device required for a connection, it works out of the box.Setting up is extremely simple with the Kasa App and pairing with Echo equally simple.So you can go ahead if you (like me) are trying to take baby steps towards a smart home.Some points to note. This is a warm white light, which means it'll give off yellow light.Its full brightness might be a little less for someone with large rooms, so better go for LB110/120 in such a case.Overall, good purchase to make!

★☆☆☆☆ The wifi control only worked for a week and not after. Tried all possible way to reset as instructed, on-off 3 times and 5 times, also reinstalling app, but did not connect again. Called tp link twice, both executives were not aware of such issue and could not solve, however have registered a ticket but did not turn up yet. It is also highly priced. I don't recommend TP link considering the issue, their service and the price.

★☆☆☆☆ Product is actually cool, simple to set up and linked up with my Alexa app easily.However, it just does not stay connected to my network (router) which means it's basically functioning like a normal bulb.TP-Link customer support was useless. I have tried to get in touch via all possible forums. I got one reply saying i should reset the bulb and re-configure it which I did, didn't work. They haven't replied to my follow in over 3 weeks since.

Rs. 1,794
Added to wishlistRemoved from wishlist 0

Rs. 170
Added to wishlistRemoved from wishlist 0

Rs. 256
Added to wishlistRemoved from wishlist 0