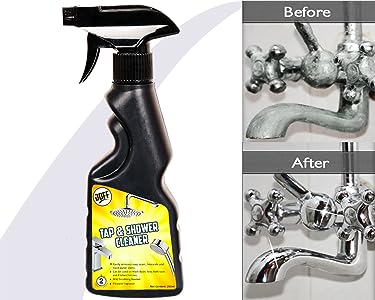 Unfortunately more than 75% of India gets Hard Water to use. Hard water is an abundant form of water which consists of minerals like Calcium and Magnesium. This Hard Water when dries off leaves behind hard, off-white, chalky deposit on the surface called Limescale. When Soap/detergent mixes with...

★★★★☆ IT IS TOO CORROSIVE, BE CAREFUL , DO NOT APPLY SECOND TIME IMMEDIATELY. IT REMOVED THE NICKLE PLATING!

★★★★★ Needs a bit of scrubbing as mentioned in direction of usage but hard water deposits do come off. Has a mild fragrance too. Attached picture after usage of solution on tap.

★★★★★ This product is really wonderful. I tried it on old steel taps and mixer taps and the result is superb. I never expected that it would make the old taps look like brand new. I replaced some steel taps because they had lost their shine even though i tried various shining or cleaning liquids. Now that i tried on the remaining steel taps, i stopped replacing them with new ones as this liquid is really SUPERB.

★★★★☆ Superb ... Specially work on lime stone which is created by water on tap. If the stain is very older then spray it. Keep it for 15 min. And scrub it well with rough scrubber you get a amazing result. Total lime stone gone and get your tap as new. Apply it two times in first use. And after that twice in a month. Keep your tao new. It's a nice product.

★★★★★ This stuff deserves a 7 star.... I stay in a rented flat and the plumbing in the house looked as if they required to be replaced but with this stuff the taps have just transformed.... Before I tried to clean it with Colgate but was not successfully and now as I said they have transformed. I really wish I had taken a before and after pic.... Before i cannot take now but after pic will surely share

Buy from Amazon get JOFF Tap and Shower Cleaner – 250ml (Pack of 2) at Rs.199 – Amazon at the lowest price. Grab more deals & offers for online shopping on discountdunia.

How to Grab this Deal Online?

Rs. 299
Added to wishlistRemoved from wishlist 0

Rs. 749
Added to wishlistRemoved from wishlist 0

Rs.699
Added to wishlistRemoved from wishlist 0