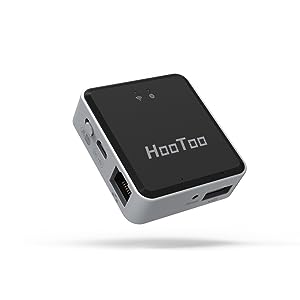 ★★★★★ well as you know iPads are expensive in India and they don't support normal flash drives as external storage device mounts. iPads can support flash drives like Sandisk I-expand which are expensive again. For people who have iPads with low internal storage like 32gb 16gb or 64gb hootoo comes in rescue. I have an iPad pro 64gb and as I use this Ipad for work so 64gb won't be enough for me.I have hard disks worth terabytes of movies, photos and other files which I would wish to access on this Ipad but cannot. I connect my power bank to hootoo to power it up and then connect my hard disk/pendrive to hootoo and voila the jobs done. Now I can stream movies from my hard disk to my Ipad wirelessly and other files too. IOS 11 doesn't allow transfer of files other than video and audio from external sources so you can stream content but not transfer from hootoo to apple devices. But there's no such issues with Android or windows machines to hootoo.T trust me this is a must have gadget for tech enthusiasts.

★☆☆☆☆ The package seal was damaged which forces you to think that someone already tried it. To confirm my doubts the product didn't work. Once I start the app, got the msg "Get File Failed" and was never able to use the device to access tiles on HDD which I had connected to hootoo. This should because seller issue. Another big problem with hootoo itself is the app. The app what we see on videos and weslbsite does not exist. All hootoo manual show an app icon with WiFi signal but the one available in play store has a cloud symbol and the features does not match either.. I don't recommend this seller and the product. waste of money and time. Asked for replacement. Let's see the next one.

★★★☆☆ I’ve returned the product because of three reasons.1. The box was opened earlier.2. The description says it have a battery and actually, it doesn’t have one.3. Price printed on the box is ₹2,499 and Amazon quoted it as ₹4,xxx with discounts on top of it (Why amazon? 😔)Now I’ll explain what the product does. It’s a tiny little device which can be used as a range extender for wifi or as a wifi file transfer device. I bought it for file transfer. It has a USB Port and we can connect our hard drive or flash drive to the device. Once connected, it will help us to access the connected drive from our mobile or tablet (tested and working on iPad Pro and Nexus 5x). It transfers the files as in description but the transferring speed was not good as I expected. It’s a kinda “OK”ish product.

★★★★☆ Good product at this price. I bought it to use as nas it's working great. Jus. Make sure that u don't update the firmware else you will loose lots of features. New firmware has only basic functions .

★★★★☆ Brought it for 1100. Good connectivity. Only use it for file sharing and not as a wifi router. I use multiple wifi enabled devices and storage is less on many of my portable devices, so it's a hassle to keep removing and connecting external storage whenever needed. I have kept an external HDD always connected to it. Its USB is 2.0 so it's slow, and file read simultanously or uploading from HDD to source device or vice verse takes a long time. Its good to share HDD with 2-3 wifi devices. But as said lag is expected. Its also very tiny and very light in weight. Overall it gets my work done. So I am happy with it.